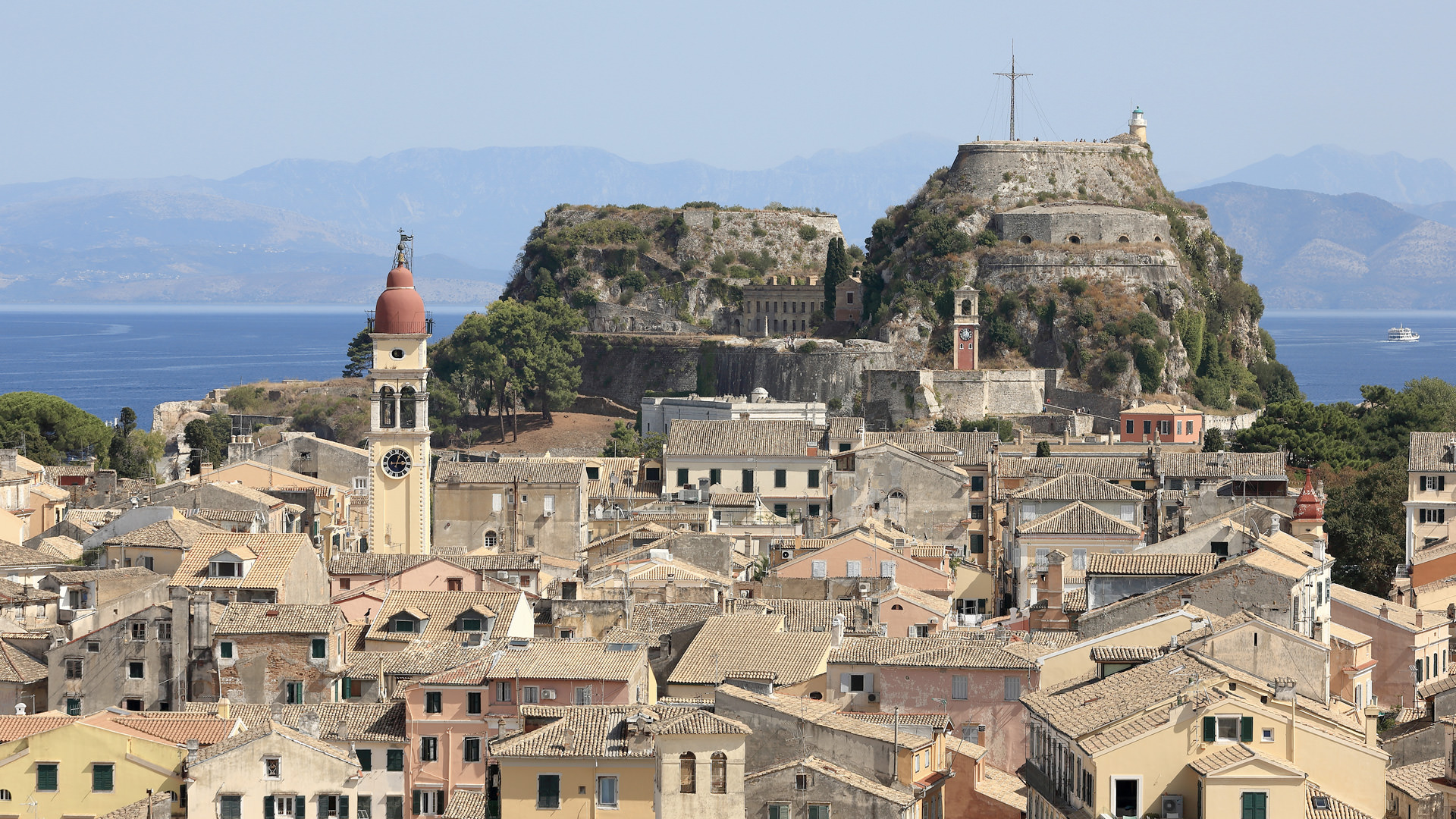 Corfu or Kerkyra is a city and a former municipality on the island of Corfu, Ionian Islands, Greece. Since the 2011 local government reform, it is part of the municipality of Corfu island. It is the capital of the island and of the Corfu regional unit. The city also serves as a capital for the region of the Ionian Islands. The city (population 24,838 in 2011) is a major tourist attraction, and has played an important role since antiquity.

The ancient city of Corfu, known as Korkyra, took part in the Battle of Sybota which was a catalyst for the Peloponnesian War, and, according to Thucydides, the largest naval battle between Greek city states until that time. Thucydides also reports that Korkyra was one of the three great naval powers of fifth century BC Greece, along with Athens and Corinth. Medieval castles punctuating strategic locations across the city are a legacy of struggles in the Middle Ages against invasions by pirates and the Ottomans. The city has become known since the Middle Ages as Kastropolis (Castle City) because of its two castles.

From 1386 to 1797, Corfu was ruled by Venetian nobility; much of the city reflects this era when the island belonged to the Republic of Venice, with multi-storied buildings on narrow lanes. The Old Town of Corfu has clear Venetian influence. The city was subjected to four notable sieges in 1537, 1571, 1573 and 1716, in which the strength of the city defenses asserted itself time after time, mainly because of the effectiveness of the powerful Venetian fortifications. Will Durant claimed that Corfu owed to the Republic of Venice the fact that it was the only part of Greece never conquered by the Ottomans.

In the city of Corfu, the ruins of the ancient city of Korkyra, also known as Palaiopolis, include ancient temples which were excavated at the location of the palace of Mon Repos, which was built on the ruins of the Palaiopolis. The temples are: Kardaki Temple, Temple of Artemis, and the Temple of Hera. Hera’s temple is situated at the western limits of Mon Repos, close to Kardaki Temple and to the northwest. It is approximately 700 m. to the southeast of the Temple of Artemis in Corfu. Hera’s Temple was built at the top of Analipsis Hill, and, because of its prominent location, it was highly visible to ships passing close to the waterfront of ancient Korkyra.

The old fortifications of the town, formerly so extensive as to require a force of from 10,000 to 20,000 troops to man them, were in great part thrown down by the British in the 19th century. In several parts of the town may be found houses of the Venetian time, with some traces of past splendour. The Palace of St. Michael and St. George, built in 1815 by Sir Thomas Maitland (1759–1824; Lord High Commissioner of the Ionian Islands) is a large structure of white Maltese stone. Near Gasturi stands the Pompeian style Achilleion, the palace built for the Empress Elizabeth of Austria, and purchased in 1907 by the German emperor, William II.

Of the thirty-seven Greek churches the most important are the cathedral, dedicated to Our Lady of the Cave; St. Spiridon’s, with the tomb of the patron saint of the island; and the suburban church of St Jason and St Sosipater, reputedly the oldest in the island.[citation needed] The city is the seat of a Greek and a Roman Catholic archbishop; and it possesses a gymnasium, a theatre, an agricultural and industrial society, and a library and museum preserved in the buildings formerly devoted to the university, which was founded by Frederick North, 5th Earl of Guilford (1766–1827, himself the first chancellor in 1824) in 1823, but disestablished on the cessation of the British protectorate.

Based on the ICOMOS evaluation of the old town of Corfu, it was inscribed on the World Heritage List. The ICOMOS experts have noted that “about 70% of the pre-20th century buildings date from the British period” and that “whole blocks were destroyed” in the Old Town by the German World War II blitzes; these were “replaced by new constructions in the 1960s and 1970s”. The urban fabric was classified as being predominantly of the Neoclassical period “without special architectural features for which it could be distinguished”.

The town of Corfu stands on the broad part of a peninsula, whose termination in the Venetian citadel (Greek: Παλαιό Φρούριο) is cut off from it by an artificial fosse formed in a natural gully, with a salt-water ditch at the bottom, that serves also as a kind of marina known as Contra-Fossa. The old city having grown up within fortifications, where every metre of ground was precious, is a labyrinth of narrow streets paved with cobblestones, sometimes tortuous but mostly pleasant, colourful and sparkling clean.[citation needed] These streets are called “kantounia” (καντούνια) and the older ones sometimes follow the gentle irregularities of the ground while many of them are too narrow for vehicular traffic. There is promenade by the seashore towards the bay of Garitsa (Γαρίτσα), and also an esplanade between the town and the citadel called Liston [it] (Λιστόν) where upscale restaurants and European style bistros abound. The origin of the name Liston has several explanations: many former Venetian cities have a square of that name, coming from a Venetian word meaning evening promenade, but it can also refer to the closed-list aspect of an up-scale area reserved to the nobility registered in the Libro d’Oro.